Hello there! I am Carles Folch, CEO and game director of Cygnus Void and Project Infinite.

For now on, we will use this blog to show what’s cooking behind the scenes in our project, cause there’s more than what meets the eye!
Every week a member of the team will update this blog with content of their respective discipline, and what a better way than starting with myself, right?

Everything began the summer of 2016. I had in mind an abstract idea of a story, something with a very deep meaning for me.

My inner self was trying to say something to me so I started to let out all these thoughts through ideas and sketches. I suddenly needed to express my emotions and my internal world through

that story, I felt that I was unveiling something that was buried very deep inside me, and that made me so pleased yet so hungry for more.

As my concept idea started growing, I began to share it with my college friends, and some of them were curious about it, so we established a group of multimedia students and started to experiment with videogame development in order to tell this story.

And then it began to transmute into something bigger. There were people who didn’t understand the whole concept, who left the early project, but there were others who saw my vision and were interested in working on it, so they helped me feed it with their creativity and talent. It was no longer my story, it was our story, our universe. This project became a philosophy of companionship, a way to see beyond the horizon; it became Cygnus Void, it became Project Infinite.

Now that I expressed some of my inner thoughts I’ll talk about the development (finally!).

When we started the brainstorming with Andreu, the current 3D animator, we found out that Unreal Engine was a very good choice to begin with. We needed those tools for making an inmersive experience, so we started learning by our own while combining the knowledge we learned on our multimedia career too.

The results were weird, unconnected and vague, but it was a good starting point. Some call this iterativity, I call it nonconformity. 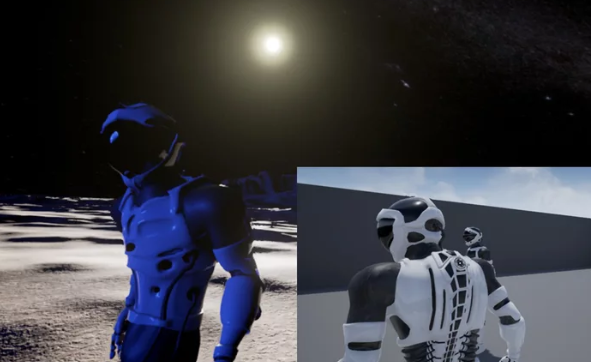 As we expanded our knowledge of game development and design, our story and universe started to grow even more too. I worked on the context of the project since day one, so Project Infinite’s lore grew massively. The other devs were quite surprised and overwhelmed about the 40 page lore document that I was working on, nonetheless they understood the essence.

There was one dev that understood everything, Sara, the project manager and lead artist, and it was so helpful to have another person debate and question my scripts. She helped me in maturing the consolidation of a deep and vast universe for the context of our videogame project.

…And because this is starting to be way too long, I’ll leave it here for today! Next day, I’ll resume explaining our origins. Thanks for reading (as well as supporting us, everything is very much appreciated :)! ).